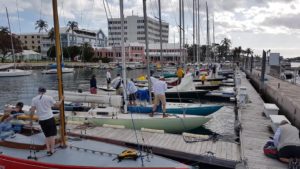 The 2019 Bermuda International Invitational Race Week, presented by Bacardi International and the Bermuda Tourism Authority, was an extraordinary week on and off the water for the IOD Class with exceptional weather. It was sunny with very light winds mainly from the east and northeast, varying from 6 knots at the beginning of the regatta to 10 knots at the end. This produced exciting racing with four different race winners in the 13-boat fleet over 10 races sailed. The regatta however was dominated by Peter Wickwire Dan MacMillan, Emily Merry, Chris Veinot, and Hillary Grantmyre of the Chester IOD fleet,  who won half the races and finished up 14 points clear of his nearest rival.

Racing for the “A” Series stated on Sunday and with light winds forecast for the week, Race Officer Tom Clarke held three races. It turned into a battle between Peter Wickwire and the new boys on the block from Suffolk England with Mark Wincer helming. Bill Reed from Fishers Island did well on day 1 and would have been leading the regatta except for a disqualification in the final race of the day, which dropped him out of contention.

Monday brought another light and shifty day with another 3 races scheduled. When the dust had settled, Wickwire dominated with 2 firsts and a second. The net result was that the top 3 positions for the “A” series included Peter Wickwire 1st, Mark Wincer 2nd and Paul Zupan from the San Francisco fleet in 3rd place.

Tuesday continued with light winds and as we had already sailed 6 races the Race Committee held only 2 races. It was moving day for Patrick Cooper of Bermuda as he got a 1st  & 2nd to move up into 2nd place for the “B” series. Wednesday was a day off for participants to venture around the Island and for some, time to play golf.

Thursday proved a challenge as there was no wind! Mercifully Race Officer Clarke cancelled racing early in the day and everyone got the opportunity to go to the beach, shop or just relax.

On the final day, Wickwire consolidated his stranglehold on the regatta and ended with yet another win. Patrick Cooper however, pulled out all the stops to end up second in the “B” Series followed by Martin Rygh of Norway.

The final overall standings for the “Vrengen Cup” which combines the results of both the “A” and “B” series saw Peter Wickwire win easily followed by Patrick Cooper and in 3rd place Mark Wincer.

By all accounts the race management was excellent with good courses, no delays and everyone getting back to the Club at a decent time to partake in post racing activities and RBYC hospitality. The light winds certainly provided challenges for the Race Committee, but all 10 races were sailed during the week. The addition of a fun race back to the Club steered by crew members was terrific, and Martin Seise, of Bermuda, won the race and received Bacardi Trophy— a trophy Martin himself had donated after winning it at the Bacardi Cup in Miami some years earlier. Watch for this race to be held again in next year’s regatta.

The welcoming cocktail party was at the Bacardi World headquarters and prize giving at the RBYC were highlights of the week from the social side of the regatta. In his victory remarks, Peter Wickwire included special commendation for the RBYC management and staff during the week.  See Prize-Giving video on Facebook.

The dates of the event in the first week in May seems to have produced less sailing conflicts and increased airline options for the competitors and also gave our participants who arrived on Friday from abroad (eight teams did!) the opportunity to see the World Triathlon Challenge held in Hamilton.  Everyone was also extremely pleased having the boats berthed at the Yacht Club for the regatta. It made getting to and from the racecourse easier and much quicker. Having the IODs there certainly adds to the ambiance of the event for our sponsors and RBYC members and with the Gold Cup following immediately after Race Week it also make the transition to that event seamless.