skip to Main Content
You Should Have Come to the North Americans
Spetember 2, 2018

Rick Thompson is widely known as the face of the Chester IOD Fleet.  Evangelizing the class, building community and forward-thinking are part of Rick’s DNA, so it is easy to think that his praise for Chester is exaggerated by his salesmanship. Last weekend at the North American Invitational, however, 8 visiting teams (10 teams total) discovered the idyllic conditions, the beautiful boats and the countless individuals that are the heart and soul of the Chester IOD Fleet. We learned firsthand, that Rick’s exuberance is NOT hyperbole, and we can’t wait to get back for the Class Championships in 2020.

Arrivals were staggered throughout the day on Thursday, so no events were organized, but the Fo’c’sle, the local pub that dates back to 1764 and claims on its website to be “Chester’s Living Room,” became the focal point from about 4pm until nearly midnight. We met old friends and new, hosts, owners and neighbors and enjoyed wings, fish and chips and adult beverages while forgetting our travel woes.

Sailing commenced at the reasonable hour of 1 pm on Friday.  PRO, Colin Mann and his team (in matching Hawaiian shirts) flawlessly executed three races in an oscillating breeze from the northeast.  Lunches were provided to all competitors and Colin kept everyone abreast of his intentions over the VHF.  Colin adjusted the distance to the weather mark to keep the races under 1-hour and the course was long enough for positions to change between roundings but short enough to get 3 races in before cocktail hour.

After the first day, Peter Wickwire and his team from Chester led Evan Petley-Jones (another local) and his young crew.  The Chester teams dominated racing NOT due to local knowledge, but moreover, as a result of their raw talent and exceptional crew work. Many of the IOD teams in Chester have “graduated” from J24s, but still race competitively in the “two-fours” and other fleets in addition to IODs – this brings unparalleled competition to our racing and revitalization to our community.

While we were on the water, Sally and the “shore crew” were hard at work at Rick’s house preparing for the party Friday night.  The buffet was filled with deliciousness and the bar was stocked to keep up with the guests’ dehydration and the bartender’s heavy hand. Hosts, owners, neighbors and friends enjoyed each other’s company, played some pool and devastated the provisions.

Racing began again on Saturday at 1pm (thankfully) with a breeze from the south.  Pressure variations played a bigger role than shifts and the starts were competitive with a handful of x-flag recalls. There was some excitement in the second race when a port-starboard collision on the first beat resulted in a dented boom, a skipper in the water and thankfully, no injury.

Class builder, Shawn Mulrooney was on the water as the break-down boat, but even in the strong breeze on the final day, no breakdowns caused racing to be delayed and no requests for redress were filed. What a treat it was to see the brand new red boat, Coachman (bow out in the first photo) – freshly launched out of the molds in June of this year – competing neck and neck against Elida and Aileen – vintage 1937 hulls.  What other class can boast such longevity?! Hats off to Shawn and those that have built and rebuilt these boats to keep them beautiful and conforming.

Petley-Jones was a few points ahead of Wickwire after racing Saturday. The slideshow on the big screen captured the intensity of the racing as we enjoyed dinner at the Chester Yacht Club Saturday night. Wickwire concluded the event with two bullets on Sunday in Bella, Petley-Jones’ regular boat, to clinch the trophy.

Ever gracious, as he accepted the beautiful perpetual trophy for the North American Invitational, Peter Wickwire acknowledged his crew and thanked all of the people that helped make the event such a success.  He also singled out the team from Fishers Island who declined their invitation when it was too late to invite another visiting team and made way for Peter’s last-minute entry. 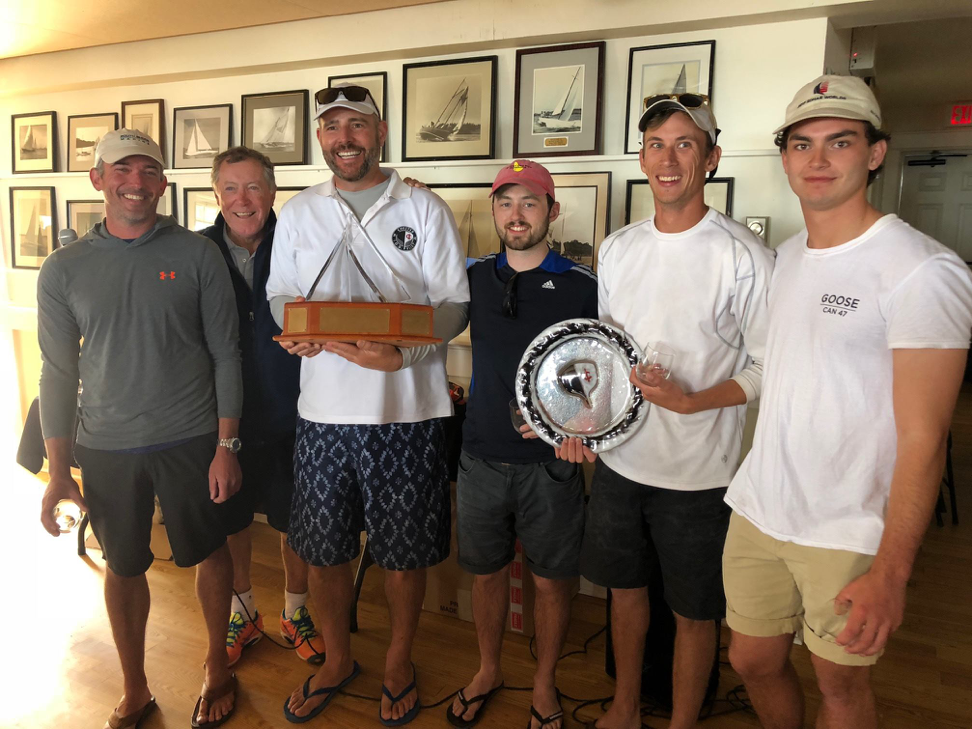 Peter Wickwire and the winning team with Rick Thompson

I first visited Chester 10 years ago when Mighty Mo was the only IOD in Chester Race Week and La Diva was on her way. The seeds that Rick planted more than 10 years ago have grown into a vibrant and mature fleet with young, competitive and committed sailors that bring depth and breadth to the competition and community. Congratulations to the winners and to all those that graciously and generously invested in the success of the event – you should all celebrate!

I don’t know why you couldn’t make it to Chester, but if the opportunity arises again, you shouldn’t let it slip by.