skip to Main Content
The Shields: Founding Family of the Internationals
April 27, 2011 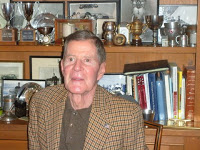 Walk into the Shields house about two miles from the water in Larchmont, NY, and you find yourself in a small museum of American Yachting history. Everything gleams! The trophies and models displayed tell the story of yachting from the 1930s to the 1980s. They include Six Meters, Sound Interclubs, International One Designs, 110s, Twelve Meters, Interclub Dinghies, and Shields Class sloops. Displayed too is Corny Sr.’s first trophy in 1907 (age 12) for a swimming race.

Our curator is Cornelius Shields, Jr., known at an early age as “Glit” to identify himself separately from his father. Corny is one of the nicest men you could meet anywhere. The sailing pictures, trophies, models and art work are worn like an old shirt as part of his life. Each has a story, a memory, probably attached to an anecdote which time doesn’t allow us to pursue completely.

One fascinating  highlight of the Shields collection is a half model of the Ethelwynn, 1895 winner of the first running of the Seawanhaka  Cup, later won by Corny Senior and Paul Shields in Six Meters. The model was a gift of the designer, W.P. Stephens (not related to Olin) at the time of their victory in 1935.

Born in 1933, Corny, Jr. has no memory of being taken along on the famous first Christmas 1936 sail on an International from City Island to Larchmont. When asked, he refers to his father’s book to corroborate the story. Fairly soon afterwards, however, he was being taken along out on the race course with Corny Senior and his Uncle Paul in a family tutorial that passed on a life-long love of sailing and the sea.

“Dad was a very kind teacher,” says Shields. “He explained all the parts of the boat to me and how they came together to make the boat go.

“He was a wonderful sport, too. When he was beaten he sailed over to the winner with a big cross-handed wave over his head of congratulations. Of course, he also wanted to know what the other fellow had done–why he had been beaten. He made careful records. It was just as important to know what he had done right when he won as what the competition had done when he didn’t.

“He had a crew member on the I,” Shields continues “who had size 13 feet! There was a large compass mounted in the floor at the center of the cockpit, and my father kept after him to keep his feet clear so he could track the shifts. In those days, we didn’t have telltales sewn into the luff of the jib. He had a light thread tied to the shroud for light air and a piece of wool when it blew. Those were his instruments.

“Another feature of the sport was that he spent a lot of time teaching and sharing his skills with newcomers to the fleet. Arthur Knapp came along, too,  with his tool box, and they would make every effort to raise the level of sailing throughout the class. He wanted to win. They all did. But he wanted to know he had beaten the best people in the sport.”

Driving from the house down to the shore, we enter the august Larchmont Yacht Club (est. 1880) on a quiet February afternoon. There, surrounded by 130 years of treasures we come upon a lighted cabinet. On the wall is a facsimile cover of Time Magazine with Corny Senior smiling out at us. Below is a handsome sterling bowl, sixteen inches across. It carries facsimile signatures from a generation of well known yachtsmen. It is inscribed “IC  1956 To Corny from all your skippers for continuing leadership and inspiration to make this the finest most competitive one-design racing class in the world; our never ending appreciation.”

The Larchmont Yacht Club Centennial Yearbook contains these observations about the Shields family:

“Cornelius Shields, most active yachtsman of the Shields family joined the club in 1924, to be followed very shortly by three brothers, John, Paul and Louis, these three being also interested in sailing, particularly Paul with his association with America’s Cup defense.

“Cornelius was a participant in the first frostbite racing at the Larchmont Yacht Club in the early winter of 1933. In 1936 he urged the building of 14 “B” class dinghies [now Interclubs] for frostbiting

“Shields also led a group of Larchmont skippers in annual team races of Sound Interclubs against the Royal Bermuda Yacht Club for 14 years from 1924-1936.

“While in Bermuda in 1935, he spied a brand new, beautiful six-meter which had been built in Norway. His unbounded enthusiasm for it eventually resulted in the creation of the famed International sloop rigged class. Thirty-five years later the Internationals continued to be considered the leading racing class of Western Long Island Sound, attracting very competent skippers, particularly out of Larchmont. …There are about 250 in the class now, the latest being built of fiberglass.

“In 1935, Shields skippered a six-meter to victory over Norway. This was repeated in 1937

“In 1962, Shields persuaded Olin Stephens to design a new sloop rigged one design class, now known as the Shields class.

“Cornelius Shields’ daughter, Aileen, won the North American Women’s Championship (Adams Cup) in 1948. Mr. Shields won the North American Sailing Championship (Mallory Cup) off Mystic, Conn. In 1952, and his son Cornelius, Jr. won it at New Orleans in 1965. This remarkable family accomplishment probably won’t be repeated by any family anywhere in the next 100 years,”

Corny, Jr. also won the World Championship of the International Class in Long Island Sound in 1963 and competed in defense of the America’s Cup as part of a distinguished yachting career of his own. His children didn’t spend much time sailing growing up, but one day he invited his daughter, Allison, a competitive swimmer, to crew for him on a Shields. It was a windy easterly on Long Island Sound—cold and wet. “I didn’t know Dad could be so bossy,” she told her mother afterwards. But we are happy to report that despite that less than-gentle-introduction to the sport, Allison recently became a regular member of the San Francisco IOD fleet. So perhaps through her expected child, the Shields line will pick up once again in competitive sailing.